Make sure to remove old mod files before installation!

❗ If the tongue or penis is appearing floating/stretched/distorted (even when Sim is not having sex) then you need to delete incompatible/outdated mods affecting tongues and/or penises. Here's a list of known PACKAGE files causing issues:

❗ If a penis made by Noir or Simdulgence is appearing deformed/stretched, you have to update it a release compatible with the newest version of WickedWhims.

❗ If your game save went back in time and you lost progress, make sure you're on the 1.91.205 game patch. Otherwise, here's something you can try to prevent it from happening again.
Download Sims 4 Studio and go to 'Content Management -> Batch Fixes -> CAS -> Remove Fashion Tags' and Run it on your Mods folder.

Animators can use this variable to disable tongues from showing up on Sims during animations. This is mostly useful when an animation doesn't use tongues.

A lot of you reported issues with your game save going back in time, so I investigated it. Although I wasn't able to find the cause of this bug, I learned that something changed in the latest patch in regards to how outfits data is working now. I managed to construct a workaround that avoids the "sensitive" point causing the save to break.

I don't know if this fixes all occurrences of this problem, if other mods can cause it, if the game itself can cause it, or what really is the source of it. It will take a while to figure it out, but hopefully this workaround is enough for now.

Due to the recontextualization of teen Sims in the game, making them prepubescent and physically immature, I'm no longer comfortable allowing them to retain sexual functionalities. You can read more about the specifics here. This is a pretty major change, but it has to be done. You can bring back the old behavior with external mods, but WickedWhims will not officially support it.

Sims have to match both the Romantic Attraction and the Interest in WooHoo to agree to have sex. Most of relationship-related features only require matching the Romantic Attraction. Adjusting preference towards Male/Female via Attractiveness will adjust the preferences in CAS.
Other mods that provided custom sexual orientation are no longer supported.

The newly introduced Wants & Fears aren't very different from Whims, but they do show up in a different way. I think this is a good opportunity to retire the existing whims and begin planning Wants with Fears to be added later.

This mechanic will most likely change due to the upcoming changes with gender preference in base game.

Thank you to Peco from CinErotique for helping with the books!

WickedWhims will now properly work with PandaSama's Realistic Childbirth mod as long as you have the 06.23 version or newer.

Unfortunately, you are required to correct the Sim werewolf body in CAS, but only if your werewolf isn't wearing any clothing.

This patch didn't actually break WickedWhims, so you are safe using the previous release if you want to.

Thanks Khlas. That's right, I wouldn't dare not crediting you.

💢 Additional fixes are in works to improve the new Sims body in general and their backward compatibility with older animations.

⭐ Thank you to Noir for providing the new body models! Check out their Patreon and LoversLab for more Sexy Custom Content!

⭐ Thank you to Khlas for providing the new animating rig! Check out their Patreon and LoversLab for sex animations and other content!

Major changes to the animating rig allowed to extend Sims body functionality, opening new holes for greater animations quality. With the new body, you will be able to see the vagina and anus open and butt move with animations that are made to use them, we just have to wait for them to be created. All existing body meshes are still fully compatible but their creators will hopefully update them to support the animated vagina and anus holes.

❗❗❗ To reiterate, animated holes and butt movement will only appear on new animations that are made with it. Currently, available custom body mods don't support the new holes, they will have to be updated to do so.

💡 If you ever see the RIG CONFLICT warning after installing this update, you must be using another mod that has the old WickedWhims animating rig. One way to solve this is to remove that mod, or you can make sure the "!WickedWhimsMod" folder has an "!" at the beginning of the name so it loads first which lets it establish the animating rig first.

😞 The included by default sex animations were not yet updated to showcase the animated holes.

The Penis Adjustments menu lets you can change Sims penis length and girth, with the addition of adjusting testicles size and testicles asymmetry. For problematic custom penis models you can use the vertical tilt adjustment.

This feature is disabled by default as adjusting size will cause slight geometry clipping and misalignment, but if you're alright with that then have fun! You can enable Penis Size Manipulation in Nudity Settings -> Body Settings.

Thanks to Crilender for introducing a few of these sliders in the first place. 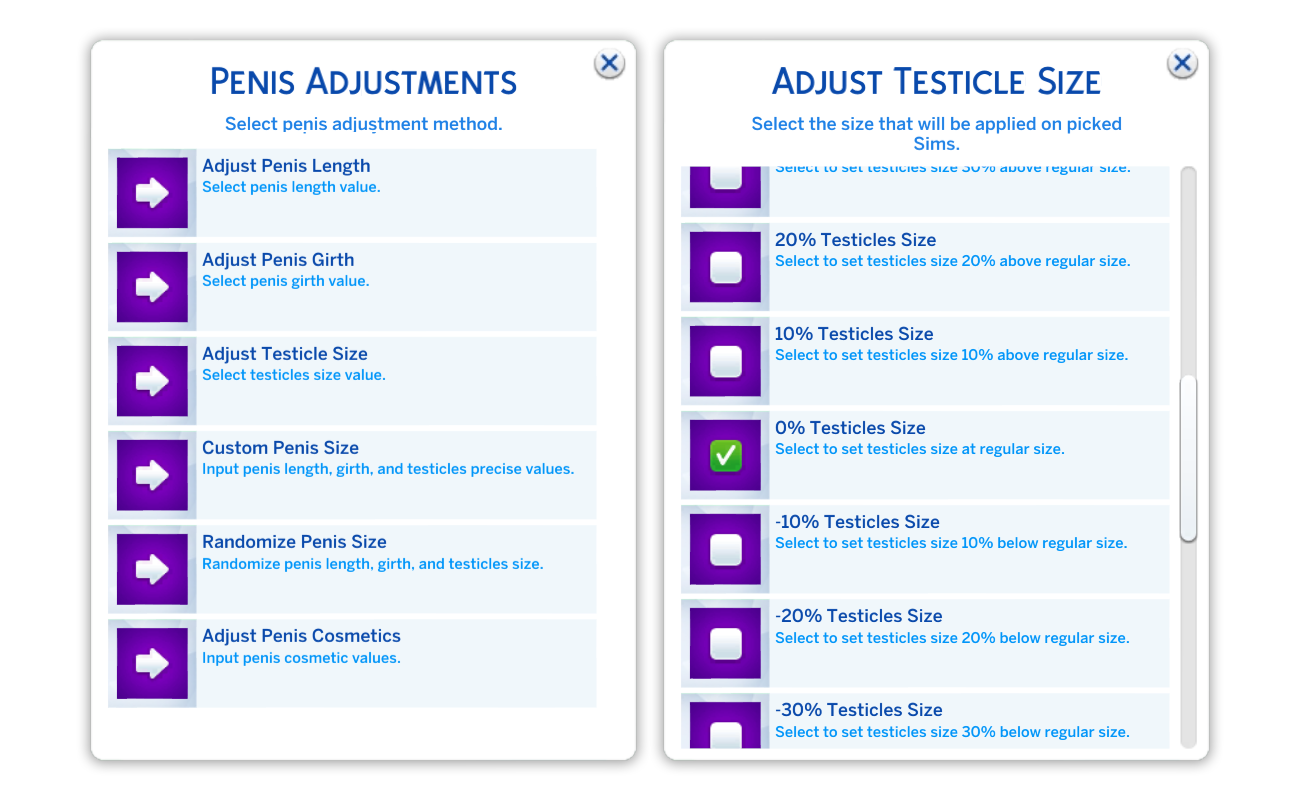 ⭐ Thank you to Noir for providing the new tongue model! Check out their Patreon and LoversLab for more Sexy Custom Content!

⭐ Thank you to sleepyhead Khlas for providing the new independent tongue rig! Check out their Patreon and LoversLab for sex animations and other content!

Major changes to the animating rig required reworking how the tongue is implemented. This meant the old tongue couldn't be used anymore which was a great opportunity to improve its visuals. Unfortunately, the reimplemented tongue functionality comes with some flaws that couldn't be fully avoided.

So what's so bad with the new tongue functionality? Pushing things means fighting with the limitations of the game and that required making the tongue independent from the Sim body itself. This can result in some odd behavior in certain situations that alter Sim typical body structure or shape. In most cases, this won't be necessary but you can now click on the tongue itself to hide it or make it always hidden in settings. I'm not aware of any common cases where this is needed but let me know if you encounter any and I will work towards better compatibility.

There it is, the ability to watch smut in the comfort of your living room. Sit down on your comfy sofa, turn on your TV, and select a video you want to watch. Just make sure nobody is home when you do this or things can change from relaxing to embarrassing. 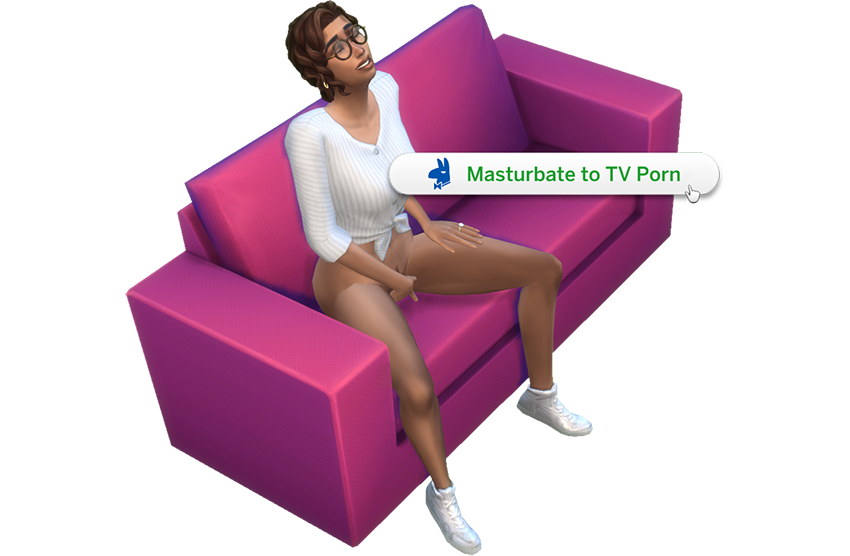 ⭐ Thank you to MizoreYukii for providing the wall marker object! Consider checking out their Patreon page.

What even is this? Good question. It's an attempt to introduce a positioning template that would allow for sex positions against walls. At this very moment, this object offers no sex animations, but most window animations can be converted to it. In the future, thanks to this object, any wall at any place might become a location available for sex.

❗ If you're an animator, make sure to get familiar with the changes below and the Animating in Blender Technical Details tutorial section.

This is an early implementation that will be used for precise location detection of complex objects (like sectional sofas or objects that can be either on land or water). Once fully realized it should allow animators to avoid problematic clipping and interactivity.

Here's something to balance the menstrual cycle experience, letting Sims know when they are the most fertile, instead of having to check phone apps or debug info.

The Impressions feature didn't get a lot of use since release and it could have been designed a lot better from the beginning. The simplification changes make this feature a lot more straightforward, simply offering additional personality traits that come with social interactions and personality compatibility.

Additional social interactions are only available between Sims that discover each other personality and their personalities are compatible. Having conversations that fit Sims compatible personalities grows their positive impression which improves their relationship.

Normally in the game, Sims don't care about their gender preference and will be alright flirting with anybody, as their preference is meant to be fluid and adapt to the player's actions. With Attractiveness allowing you to select gender preference, this can be problematic as Sims will respond positively to flirting but will refuse sexual interactions. The 'Romance Gender Preference Outcome' setting will alter all romance responses to respect gender preference so you will not be confused anymore.

If you're not aware, the Pose Player by Andrew available on the Sims4Studio forum is a widely used mod for anybody taking pictures in the game. I was often asked to support poses so the positioning tool can be used... so I asked Andrew if this would be okay and here it is! Adult Sims can be posed with access to outfit, camera, and positioning features that are already in place.

You should still keep the Pose Player by Andrew for your regular usage as this posing functionality doesn't support all Sims and doesn't work the same way.

Some functions in WickedWhims are not so obvious to everybody or are simply hidden in places that not everyone looks into. Maybe even you don't know everything about this mod, so check out the WickedWhims Secrets Lessons category.

New tutorials will be added with time, usually after I notice that some players are asking for things that already exist but don't know how to find them.

Unfortunately, some text cannot be properly updated. Because there is no way to determine if a pronoun is singular or plural, cases like "they is" and similar will happen. Perhaps future game patches will correct this mistake.