Make sure to remove old mod files before installation!

All non-rewarding traits have been moved to a new menu that is accessed by clicking on any Sim and going to Wicked -> Personalization -> Wicked Attributes. You can freely give and take away any of these traits and Sims who already have them, will continue to keep them. 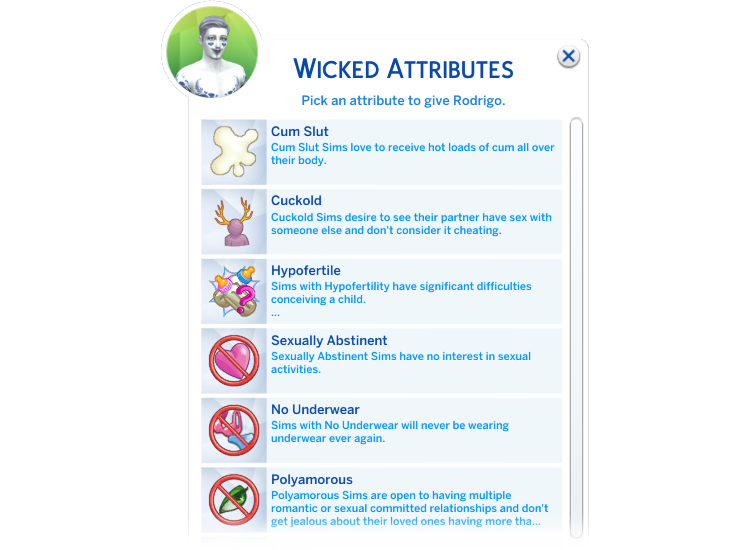 The number of interactions is growing and trying to fit them all under the Wicked pie category is becoming messy. Most of the Sim-specific and occasionally used interactions were moved to the newly added 'Personalization' pie category to make things look a little cleaner.

Sex Animations Progression offers by default a very open model of choosing which animations are fitting for the Sims in the sex interaction. No matter the sexual orientation of Sims involved or the dominant sexual orientation created by the combination of Sims, all animations are available as long as they fit the required functional roles. This can become unfitting when the intent is to keep Sims in a heterosexual or homosexual oriented intercourse instead of it going back and forth.

By enabling the 'Fit Sex Animations To Sexual Orientation' setting, the sexual orientation of the sex interaction is determined by involved Sims, which is based on their functional role (has a penis or has a vagina). This only applies to pairs, as group sex is too contextually specific to have the confidence of the dominant sexual orientation. When the combination of Sims in the interaction is determined as homosexual or heterosexual, only sex animations flagged as such will be available and picked by progression.

The entire Sex Satisfaction implementation has been redone and all that was present before has now been replaced by new content. Every sex interaction can now result in one of the 40 new moodlets, both positive and negative.

For quite a while I was being asked about the missing 'Sex' skill and when it would be re-added to WickedWhims. Now I'm proud to announce that the 'Sex' skill is not being added and instead you get the 'Sexpertise' skill.

Sims Sexpertise reflects their knowledge about sexuality, intimacy, sexual desires, and how to be a better lover in bed. With the new Sexpertise skill books you can fairly quickly reach the third level, learning about all of the basics, and the rest is left to practice.

And of course, high Sexpertise level has a substantial impact on the sex satisfaction of your partners. 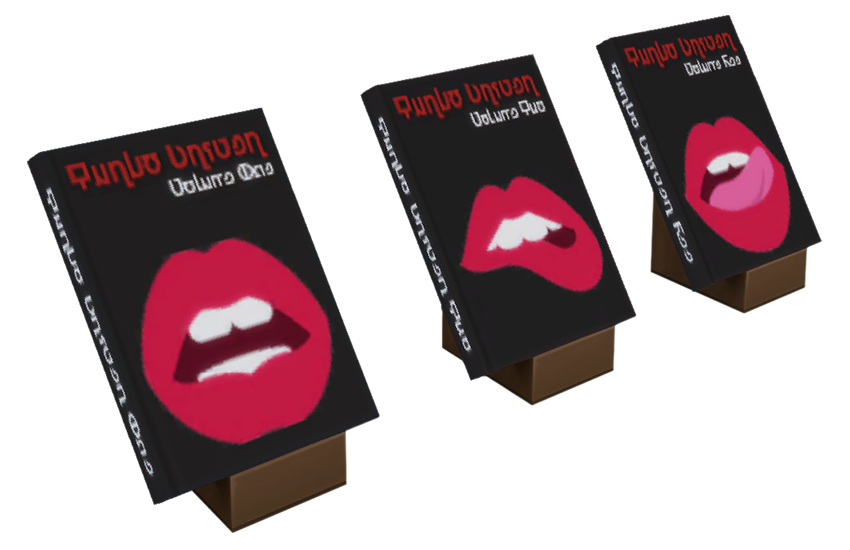 There are a bunch of factors that contribute to sex satisfaction and these are the more noticeable ones. Overall Sims sex life is fairly positive and most will have good experiences unless in a really bad state.

This one is difficult to explain, so let me start with an example. In a relationship, there are two male Sims and a female Sim. Both male Sims are romantically involved with the female Sim, but are not romantically involved with each other. In fact, they don't like each other very much. When one of the male Sims is having sex with the female Sim, the other male Sim cannot join because they find the male Sim in sex as uninteresting. That's because, when joining, all Sims are checked for their relationship scoring and it only takes one for the joining process to be aborted. By disabling the 'Joining Sex Relationship Compliance' setting, only one of the Sims in sex has to be interesting and the rest is ignored. This means, that now, the other male Sim can join, because they find the female Sim interesting, and the male Sim is ignored.

Previously existing 'Infertile' trait has been removed in a recent update, as its purpose was redundant with the option to modify Sims fertility in CAS Gender Settings. The 'Hypofertile' Wicked Attribute (Trait) comes with a similar purpose, as any Sim with this trait will have their fertility lowered to mostly sub-1% chance. This applies to all genders with the Simple Pregnancy Mode and the Menstrual Cycle Mode.

Big change, but it seems like there might be an audience for it. All Try for Baby interactions are now compatible with the Simple Mode and Menstrual Cycle Mode. This means that Sims will only get pregnant if WickedWhims pregnancy rules allow for it.

Inspect the oddly huge Porcelain Vase and stare deeply into its intriguing patterns that seem to swirl around when observed.

Make a decision, a conscious decision, if you're willing to give away your mortal form and become a manifestation of joy and pleasure. 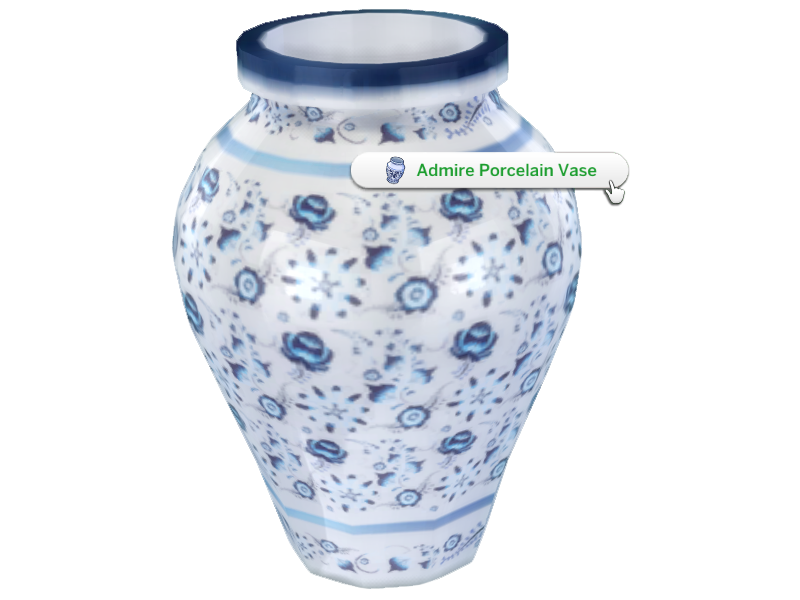 Enchanted into the form of a Porcelain Doll, Sims in this form are bound by the constraints of being a toy for humans, seeking attention and pleasures from others to avoid feeling neglected and useless.

Have fun and socialize with others, keep away the filth, and enjoy existence without the need to eat or drink. 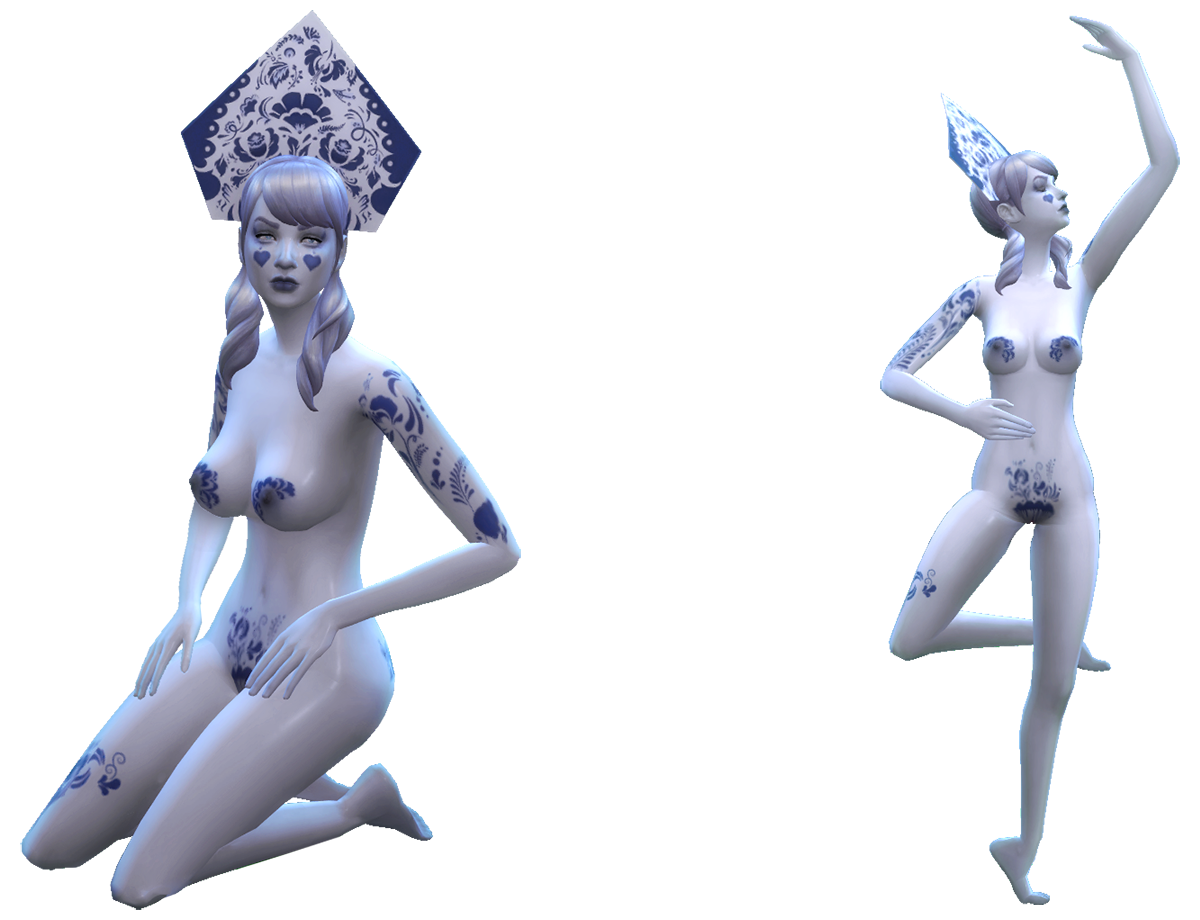 Find an owner to be claimed by and take pleasure in playing together. As a doll, your purpose is to make others happy which makes you happy as well.

Thank you to Yulia Varasabi for the original visual concept:

Thank you to Nolan-Sims for creating the porcelain skin:

Thank you to Lupobianco for creating the sleeping animation: